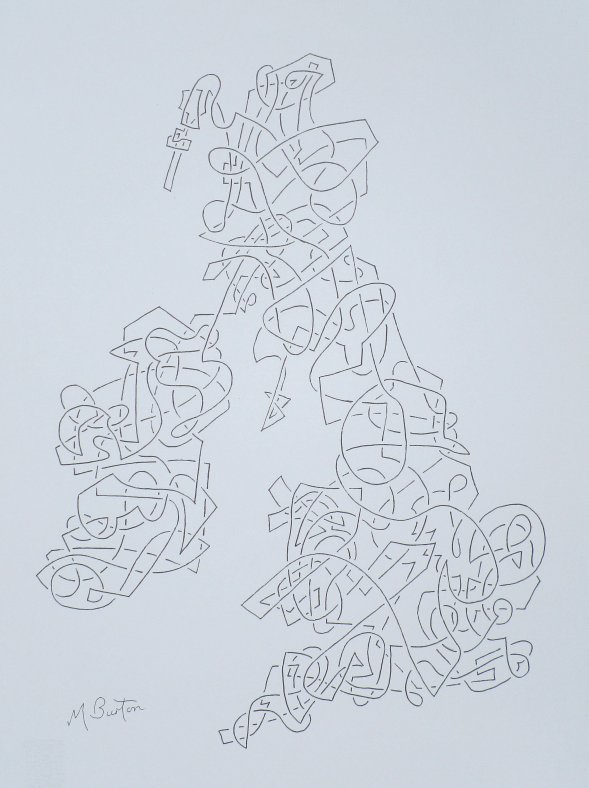 The Tour de Yorkshire annual cycle race has become a fixture in the Yorkshire calendar, but can be disruptive to other events or day trips we may plan.

Harrogate and Nidderdale Art Club’s exhibition, intended to take place on Early May Bank holiday, was moved this year to Spring Bank Holiday weekend 25-27 May 2019 due to the Tour de Yorkshire coming through Ripley, where we hold the exhibition, on Friday 3 May.

My Tour of Britain drawing has a continuous line starting and ending in Yorkshire as well, but would take slightly longer than the 4 days of the Tour de Yorkshire and require some trips over water.

The Tour de Yorkshire passed Ripley Town Hall, where the Exhibition will be held this weekend, and the Television coverage did a feature on Ripley including aerial views of Ripley Castle and the family of Sir Thomas Ingilby our art club’s patron.

That day’s stage, from Doncaster to Bedale, passed some other places which have a close connection to myself.  As well as passing Scholes Village Hall, near Leeds (where Joan and myself play table tennis on a Sunday morning), Harrogate (where I went to school and served as a Police Cadet) and Ripley (as above), into Ripon passing two road ends where I grew up in the 1950’s and it ended in Bedale where my mother’s family (Mace) were based from the early 1800’s.

Last year’s Tour de Yorkshire went through Bedale and the reception was so impressive that the organisers decided to finish a stage in the town this year.  Here is a photo from the 2018 race where the riders went over the railway level crossing from Bedale into Aiskew and on the left is Park House, the Mace family house from the 1920’s.

Joan and myself had intended to visit my Aunty Vi Doyle, 98 years old and who’s first husband was my mother Brenda’s youngest brother Harry Mace, on Friday 3 May.  When I realised that the Tour was finishing in Bedale that day I knew that we would not be able to get any where near her house and so we went a few days earlier.  Vi’s health had been deteriorating for some months and she was distinctly weaker this time and did not eat much of her fish from Fishy Hall’s for the first time ever.

We found out about the exact route of the race which included going past Vi’s bungalow in South End at the start of the finishing straight and we told her she would hear the cheering.

Joan and myself watched the end of that stage on the television and after passing Vi’s the riders went up the main street passing the top of Emgate, in sight of the Oddfellows Arms (now The Three Coopers) where my mother was born, and finished next to the house in North End where my parents had their first home.

The cheers of the crowd would be one of the last memories of Aunty Vi who sadly died peacefully this morning in her own home.