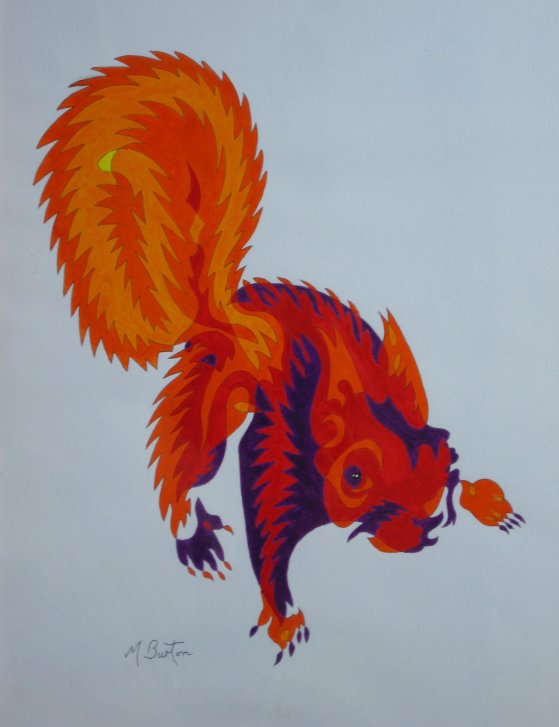 This continuous line Red Squirrel, completed with colour sequence, is one of my pictures to be hung at the Leeds Art Exhibition and Sale put on for the 15th year by St Gemma’s Hospice. 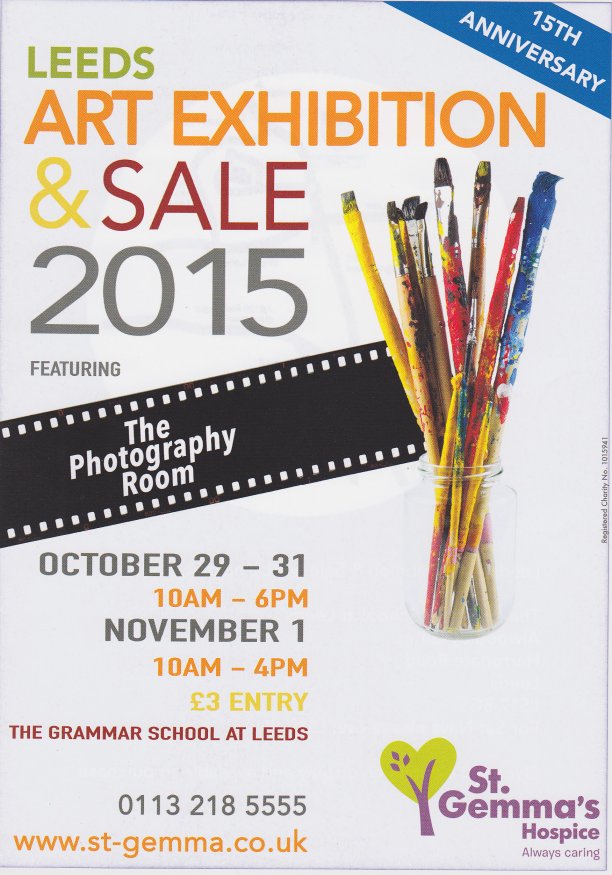 This colour sequence squirrel is the last of a series which began with my attempt to produce a continuous line drawing with a shimmering fur effect for the squirrel. 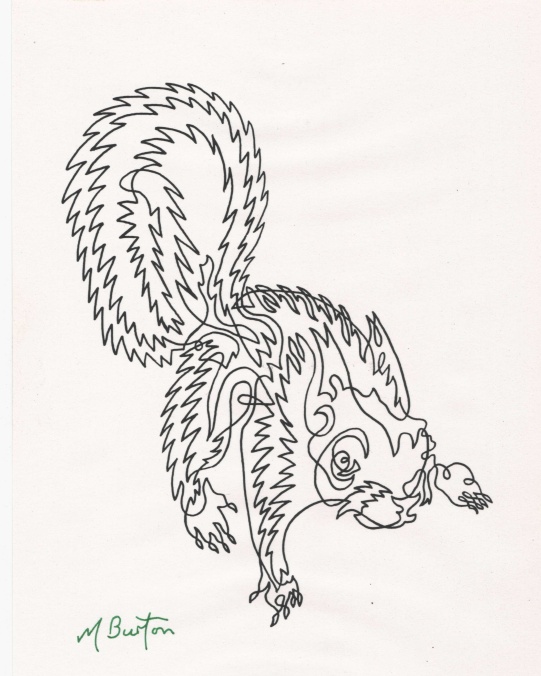 I have a treasured memory of seeing a Red Squirrel, when I was four, sitting on a wall next to our cottage at Arncliffe Hall, in the North Riding, where my Dad was Head Gardener to Sir Hugh Bell just after the War.  I thought that completing alternate shading with copper paint would best reflect this colour in this picture from 1970.  My daughter Kate said on the phone today that she remembered this picture being in the hall when she was young. 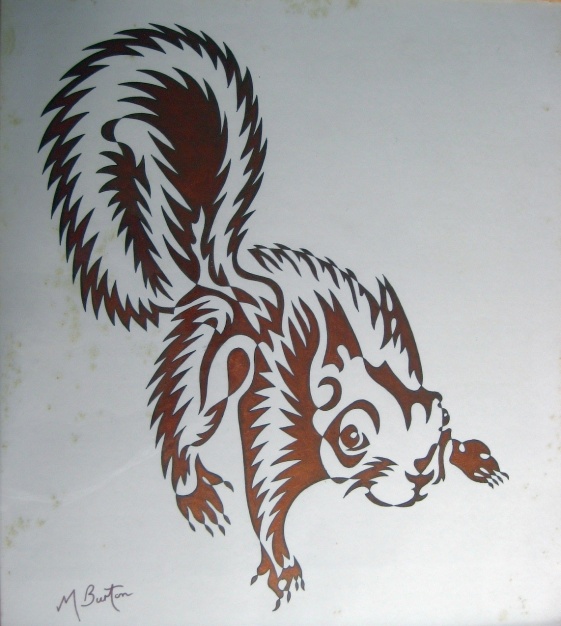 I have many clear memories of living at Ingleby Arncliffe from the age of nearly two, to four and a half when we left.

Falling out of my pram outside the local shop and crawling up the step was the earliest. There was a three legged cat, then at Sunday School one of the stamps I collected was “The Light of the World” by William Holman Hunt (my first taste of the Pre-Raphaelites) and I won the child’s sprint on sports day on the cricket ground.

In the famous terrible winter of 1947, I remember Dad helping to dig a trench in the snow drifts down to the village.  It was amazing to walk along the trench and not be able to see out.

I once watched a pig being killed in the yard by the cottage and the workman laughed as he squirted me with the pig’s bladder.  This memory came back years later when, as a young police constable, I attended my first post mortem (of a coal miner who had been in an underground tunnel collapse).  My sergeant stood with me and assured me that it would be just like a newly killed pig being cut up, if I had ever seen one.  I said “Yes, I saw one when I was four ! “

I only see grey squirrels now, mainly helping themselves to the bird seed Joan puts out.  With Gledhow Valley Woods at the end of the garden we can have five of them at a time.  Yesterday, a young squirrel was chased by a cat and ended up on the trellis a few feet from our dining room window.  Joan chased the cat away and called to me as the squirrel was too scared to move.

I took some quick photographs whist it was still there, but it became apparent that it was not going to move and was looking at me pleadingly.  So I went out and shepherded it into the bushes.  Here are some photos of a shimmering fur tail. 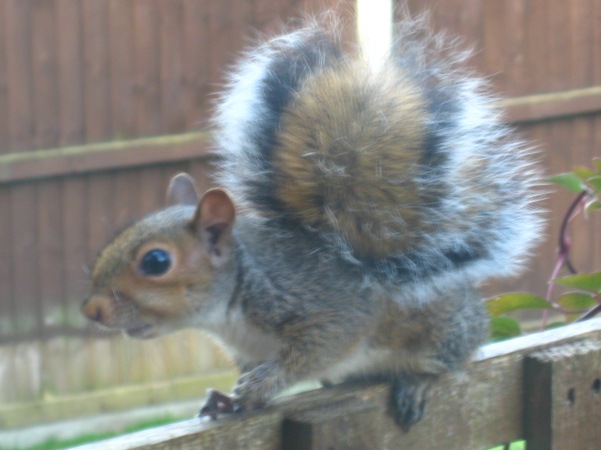 Young Grey Squirrel from Gledhow Valley Woods. Three feet from my window after being chased by a cat. Mick Burton, Leeds artist.

Young Grey Squirrel not daring to move, even though Joan had chased the cat away. Mick Burton, Leeds artist. 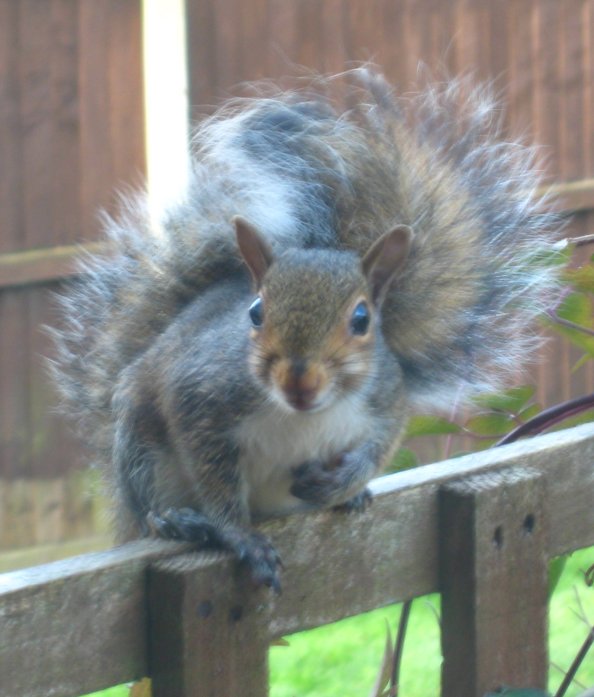 Young Grey Squirrel, imploring me to stop taking photos and do something about the cat. So I went out and shepherded it to the bushes. Mick Burton, Leeds artist.