I have mentioned the local Gledhow Valley foxes several times in my posts, but this is the first time that we have seen four at once in the garden, which backs on to the woods. There appear to be two young ones and two adults (or older siblings).

In the above photo the foxes are licking themselves and each other and this seemed to go on for ages.

Joan and I have been provided with all sorts of entertainment by the foxes over the last few years.

Our next door neighbour used to put out spare ribs in their back garden.  One time a magpie was enjoying these when a fox came along and picked one up and went away with it.  The fox returned several times for others and the magpie became more agitated each time, finally bouncing around the fox in circles and squawking loudly, as if to say “Those are my spare ribs, get off them, clear off ! “.

Twice when we have had relatives here for Xmas and eating Xmas lunch in the dining room we have seen a rare event.  Looking out of the French windows there would be a fox helping himself to all the bread scraps we had put out on the low bird table, as if taking part in the festivities.

Foxes are territorial of course and I we have seen one on the garage flat roof marking his territory up there.

Of course, they are also hunters and we have seen one trotting up the garden, spotting a squirrel to one side and shooting off sideways to grab it in its mouth and then continuing on its way.

As hunters, our foxes have an annual run in with the swans on the Gledhow Valley Lake.  Several years ago we were walking past the lake at about 7pm in mid May when we saw a fox standing nose to beak with a swan, on its eggs on the nest in a shallow part of the lake.  A photographer, who was watching, said that the fox would not take on a swan on its own, but suggested that when it was dusk, several foxes could work together to try to get the eggs.  The next day there were no eggs.  Something similar may have also happened this year.

Foxes are wary of cats.  Avril, who lives on Gledhow Valley Road was once at the end our garden asking if we had seen her cat, which she said was quite shy and usually stayed in the garden.  It was a large fluffy cat.  The next day I saw a fox at the top of the garden just to the right of the huge oak in the corner.  It then backed to the right and a big fluffy cat came slowly from behind the tree, nose to nose with the fox.  The fox eventually turned slowly away and left.  When I saw Avril again she said she was not surprised as the cat was in charge of all her dogs, including a large Alsatian.

We have also seen the effects of mange on an adult fox, which we saw for some time a few years ago, and it seemed to survive.

The fox below appeared on 4 July 2018, and may be one of the four we saw in early June.

This fox was up and down the garden a few times.

Shortly afterwards, Joan was at the back of the garage with her watering cans and I walked down to the front and between the garage and the house only to come face to face with this fox.  It veered off and went between our garage and next door’s (a gap of about 8″).  I shouted to Joan “Fox coming through”, which of course meant nothing to her until it burst out at the top end of the garage.

And now for a different view of a young fox.

The next day, a young fox appeared, which I think may be a younger sibling of yesterday’s fox, and headed for the pond, which we have in a half wooden cask, for a drink.  There were also  five magpies going in and out of the bird bath. 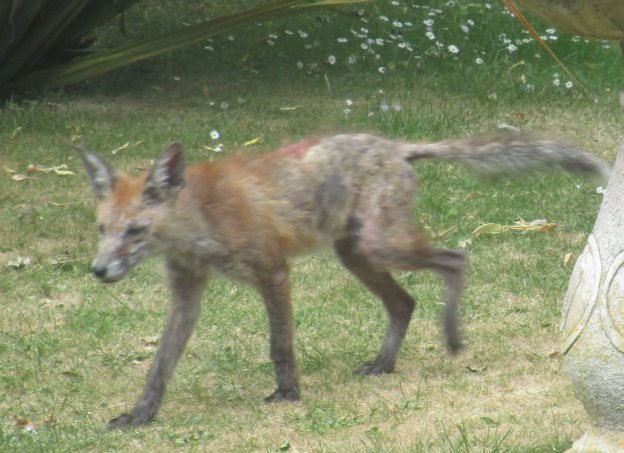 It was soon obvious that this was not a well fox, certainly compared to the one we saw the previous day.  Lacking in fur and with a red sore patch on its back.

The fox now wants to have a drink from the bird bath, which the magpies have temporally vacated.

The fox can’t quite reach for a drink as the magpies have splashed away most of it.

This close up of the fox shows all the caking and cracking of the skin and the red open wound which are advanced signs of mange.  Of course it is made worse by constant scratching, and the longest period of hot dry weather since 1976 would have contributed.

All five magpies were nearby.  They were quiet, seemingly knowing that one of their rivals was really struggling.  Eventually the fox wandered off up the garden and into the woods.

Sadly, the following morning we found the body of this young fox on the lawn near to the pond.  Possibly the adult foxes would not let it into the den if they thought that it may die and would need to be removed, and so it returned to our garden.

I buried the fox in the garden, near to Tufty my cat.

But what about the other young fox?

On 15 July 2018 this young fox appeared and it showed similar signs of having mange just like its sibling.  I is seen here eating some scraps of bread left by the magpies.  There was no sign yet of an open wound and so hopefully the mange was not as bad as with the other fox.

We all hope that this one survives.

I drew this picture over three years ago and I sold it at St Gemmas Leeds Art & Photography Exhibition & Sale last year.  I was also asked to produce a similar one as a commission.

This year it is the St Gemma’s 40th Anniversary Arts Festival and I am one of the 40 artists invited to take part.  As I have intended to do a colour version of my foxes single continuous line for some time I will now complete one to include in my exhibits.