This is my second year taking part in the Association of Animal Artists exhibition at Martin Mere Wetlands Centre, Lancashire.  “British Wildlife” runs until 29 March 2015.  My chosen wildlife submissions are “Mouseman Mouse and “Gledhow Foxes Sunbathing”.

My grandad George Burton was born in Kilburn, North Yorkshire, and when I was young my Dad took me to the Church in Kilburn and pointed out the carved mice which appeared on the church furniture.  They were carved by Robert Thompson, who was at school with Grandad, and his family still run the furniture business in Kilburn which is now world famous.

As time went on I found out so many things about Robert “Mouseman” Thompson and his mouse trademark.  It seemed natural that I should do a  mouse in my continuous line drawing style and colour sequence.

Dad told me that Grandad and Robert were drinking companions in the late 1890’s and he passed on some stories of those times.

A man went to the pub in Kilburn with his groceries every day before setting off home.  He always went home over the “beck” footbridge, which had vertical rails with strappings through them.  The man habitually stopped half way across, sat on the straps and lit his pipe.  Grandad and others loosened the straps one day and the man later fell into the water.  There was a lot of “fuss” about that.

Another regular at the pub always parked his horse and trap outside and, of course, regardless of how much he had had to drink the horse could find its way home.  One night he came out of the pub and boarded the trap, not realising that the horse had been turned around between the shafts.  He drove off backwards to crash into the church wall.

I attended a talk by one of the Thompson family over 40 years ago in Leeds Central Library and spoke to him later.  He said that each wood carver had his own style of mouse.  Old Robert’s mouse had become very simple, like a wedge of cheese, and they called it “grand prix” mouse. 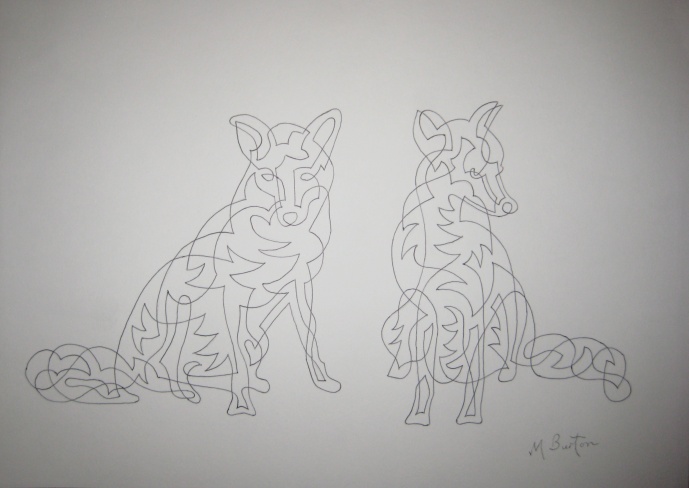 I saw a fox cub at the east end of Gledhow Valley Woods when walking the Airedales over 30 years ago.  Since moving here foxes have regularly been in the garden in the day time.  Last summer they took up sun bathing at the top of the lawn virtually every day for a period.  This usually included a prolonged period of scratching.

When we were completing the patio, with the help of Helen, Janet and Richard, a fox came and sat at the top of the garden and watched.  He had the demeanour of an “overseer” or a General overlooking a battle.  On another day there were two of them sitting up there and they reminded me of the “King and Queen” sculpture by Henry Moore which I saw up on the hill at Yorkshire Sculpture Park in 1987.