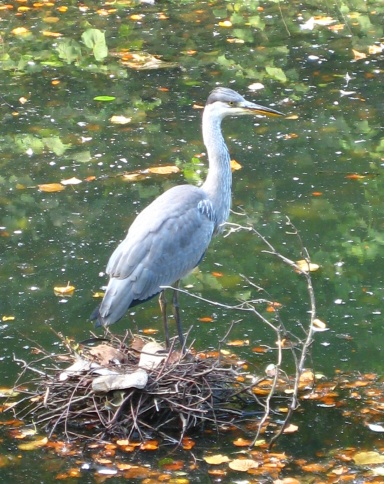 I am an artist who draws and paints quite a lot of animals and birds and it is great to live in a wooded valley which has a stream and a large lake and plenty of wildlife.

Our house is at the East end of the woods, which stretch for about  a mile.  There is a road running the length of the valley, which goes near to the edge of the lake.  Gledhow Beck feeds the lake from  the west  and a road from Chapel Allerton crosses the valley and stream and then winds up a steep south facing slope known locally as “Little Switzerland”.

I have lived in Gledhow Valley, at two different addresses, for nearly 40 years.

There have been swans on the lake for many years and of course ducks , moorhens and coots.  In recent years we have seen a heron, mainly on the other side well away from the main viewing stage. 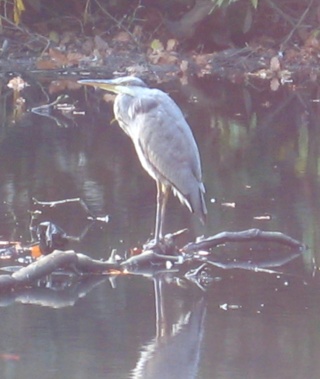 In the last couple of months there have been two herons and I took the attached photos a month ago.  The older heron (see left) was still quite a distance away but the young one (see above) was more accommodating and I took quite a lot of photos from the dam on the East end of the lake.  My bird watcher friend Bernard says that the young heron will be about a year old.  It seemed to be catching small fish in its beak.

About a week previously Joan had spotted a Heron sitting up in a tree in the next garden to ours.  I was too slow to get the camera before the bird flew off, but it seemed to be looking down into the beck which runs past a neighbour’s garden.  This would probably have been the young heron.

I then remembered an incident  earlier in the year, in January, when Joan found a fish on the back lawn.  It was 9″ long and I photographed it (see below).  We could not understand how it got there and our friend Jerry, who is a keen fisherman, said that it was either a Rudd or a Perch and it looked slightly damaged on its side.  Possibly a heron was passing by with the fish and dropped it !

The photo shows a largish animal dropping above the tail, which could be from a Fox (we see one most days in the garden – even two at once last week) maybe claiming title to the fish.  We left the fish there and it disappeared.

Our enjoyment of the valley is greatly helped by the Friends of Gledhow Valley Woods who once a month organise volunteers (including Joan, and occasionally me) to collect litter and do all sorts of development work and repairs on paths, seats, signs, etc.  They hold an Annual Fair and an Open Day of the Well House, or Gipton Spar Bath House, which was built in 1671.