“Fluorescephant”, the original version of “Elephant Grass” which is at the top of this continuous line blog, was my first successful Colour Sequence painting.  The sequence ran from yellow through greens to blues in steps of colour and tones which gave a natural three dimensional effect and dynamism.  Part of this was the overlapping nature of continuous lines which was reflected by the successive darker colouring.

The painting was accepted for the International Amateur Artist exhibition, in Warwick Square London, in February 1973 and then a month later in the National Society annual open exhibition in the Mall Galleries. 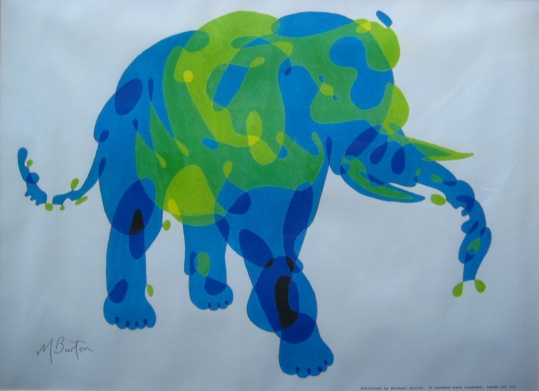 I was never totally happy with the colouring.  I thought that there was an extra natural effect, on top of the overlapping, which I was missing.  When I started my art again in 2012, after a gap of nearly 40 years, I once more tried to sort this out.  I realised that I could enhance the twisting of the design and highlight gaps where the outside would show through.

Here is the result, “Twisting, Overlapping, Envelope Elephant”.  Imagine that the continuous lines are describing a sheet of plastic, which is coloured Blue on the front and Red on the back.  Each time a twist occurs, against the outside background, then I colour it Red.  When the overlaps build up, the shades of the blue front go darker blue, and the shades of the twisted areas become darker red.  Where the blue front and the red back occasionally overlap, then I use violet to reflect the mix.

This continuous line drawing is coloured to represent a “Twisting, Overlapping, Envelope Elephant”, which is Blue on one side and Red on the other. Mick Burton, 2013.

You can see considerable areas of background colour within the animal showing through. This looks natural within the form of the elephant.

The blue areas, including darker blue overlaps, are the same as the blue areas in the “Fluorescephant”, so it is good to keep a large part of the original colour sequence in this change of style.